Why Do Oyster Habitats Need to Be Restored?

Human activities, in concert with natural phenomena, have greatly affected the distribution and abundance of oysters in the United States. In many areas, oyster habitats have declined precipitously in recent years due to many causes, including overharvesting, destruction of habitat, water pollution, and other effects related to coastal development. The loss may be most severe in the Chesapeake Bay, where only 1 percent of the historical oyster resources still remain.

While the intertidal oysters of South Carolina may still appear to be abundant there is increasing evidence of negative effects from anthropogenic (man-made) stressors such as nonpoint source runoff and wakes from increasing recreational boat traffic. In fact, in many of the more heavily utilized creek systems, essentially no oysters remain.

South Carolina oyster resources also suffer from a lack of husbandry (conservation), particularly in the common property grounds managed by the state. Appropriate husbandry includes replanting of oyster shell to provide substrate for subsequent generations. If removal of oysters by harvesting is not offset by replanting, the resource declines due to reduced sufficient substrate.

How Can We Restore Oyster Habitat? 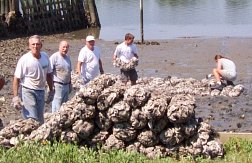 Oysters will readily recruit to planted shell substrate in areas that otherwise have little or no recruitment due to lack of suitable attachment sites. In South Carolina there are adequate breeding populations (adult stocks) but recruitment is limited by substrate. Although a fully functional reef requires 3 to 5 years to develop, an impressive suite of invertebrates (over 85 species) quickly colonizes the oyster reefs, providing food sources for larger invertebrates and finfish and beginning the natural process of stabilizing the reef.

The Marine Resources Division of South Carolina Department of Natural Resources has initiated a program to restore and enhance South Carolina oyster habitats. Part of this program is a community-based restoration effort to involve citizens in habitat enhancement. Working side-by-side with scientists, citizens volunteer to build oyster reefs using recycled shells.  By October 2014, volunteers had completed 225 reefs at 69 sites from Murrells Inlet to Hilton Head Island.

After the reefs are constructed, volunteers are trained to monitor water quality, reef development, and reef/shoreline interactions. The overall goal of the SCORE program is to protect this natural resource by increasing citizen awareness of the ecological importance of oyster habitats and the potential negative effects of human activities on these fragile systems.

For more information on the SCORE program, email score@dnr.sc.gov or contact Michael Hodges (843.953.9241) with the South Carolina Department of Natural Resources (SCDNR).